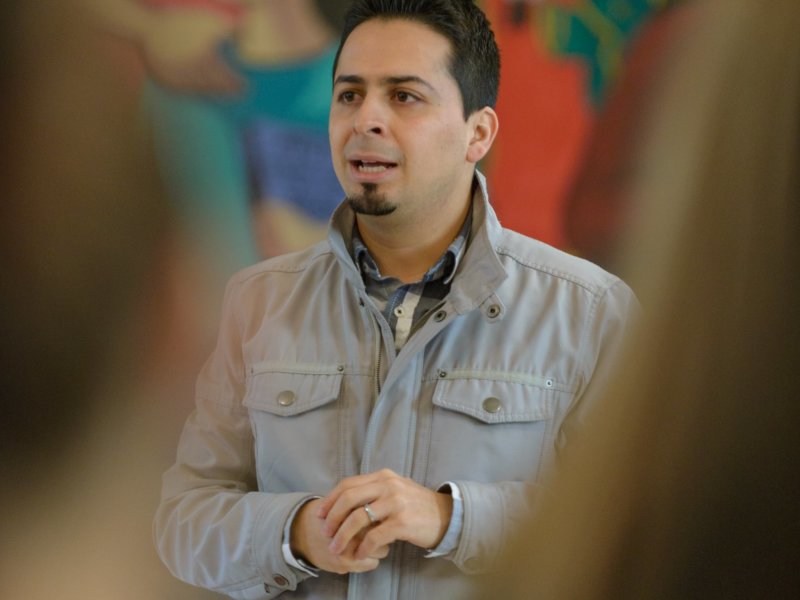 Originally from Mexico, Jaime Arredondo arrived to Salem, Oregon with his family as a young boy. Salem seemed so different from his hometown. Hearing English spoken was unheard of back home in Las Ranas, Michoacán.

Decades separated from that childhood arrival, and with the experience of age and hindsight, he admits “[I] did not know how to read or write very well when I came into the third grade”. As an educational advocate for Latinx youth, he now realizes the significance of the barriers he faced as a Salem-Keizer School District student. “[Third grade reading and writing proficiency] is the predictor for high school graduation.”

Jaime exceeded those predictions and catapulted himself into uncharted territory when he enrolled and graduated from Willamette University with two Bachelor’s Degrees: one in Spanish and another in Rhetoric and Media Studies.

As one of five children born to hardworking immigrant parents, he knew that by entering higher ed, he was going to repay not only what his parents had done for him but also the farmworker justice movement that had enveloped and supported his family.

He proudly states “I always tell folks that I am a product of the network…one of the first places [my family] went to was PCUN (Pineros y Campesinos Unidos del Noroeste) and I’ve been involved since I was eight years old. I’ve seen both sides, what it’s like to come in through the doors asking for help and what it’s like to be on the other end…helping lead the movement”.

Jaime’s personal journey into organizational management heralded a mix of emotions. Early on, feelings of inferiority were aggravated by a lack of institutional knowledge and limited access to influential networks.

During this period of professional growth, he first became aware of the Oregon Community Foundation (OCF). Jaime and a colleague reached out to OCF to inquire about grant funding assistance for an after-school program for youth he had envisioned at La Colonia Libertad (a Farmworker Housing Development Corporation multi-family housing project).

There were 48 families at La Colonia, its colloquial name. He remembers the idea for the program came from seeing hundreds of elementary school aged children with no structured enrichment activities at the apartment complex. “We [needed] to develop programs for this site so that kids [could] have opportunities (to learn) after school. And we got the money.”

Witnessing first hand the difference that OCF funding – along with the technical assistance of the Latino Partnership Program (LPP) – could provide made a huge difference. Jaime regarded LPP as having “a ton of potential” and with that initial experience, the transformation began. His feelings of inferiority and nervousness converted into one of genuine appreciation and mutual trust.

Over the years Mr. Arredondo has learned that his perspective of philanthropy has changed. “[Working together with the foundation’s Latino Partnerships Program] it’s not a top-down thing…I view them more as partners…that’s probably more important than the money they help give.”

Today, Jaime’s unique perspective plays a role in his motivation to continue the challenge of helping others. When asked if he believes LPP has made a difference, with the calm and integrity that his peers recognize in him, he shares, “Yes absolutely. Latinos are more aware of philanthropy and how it works because of LPP…that’s pretty transformative.”